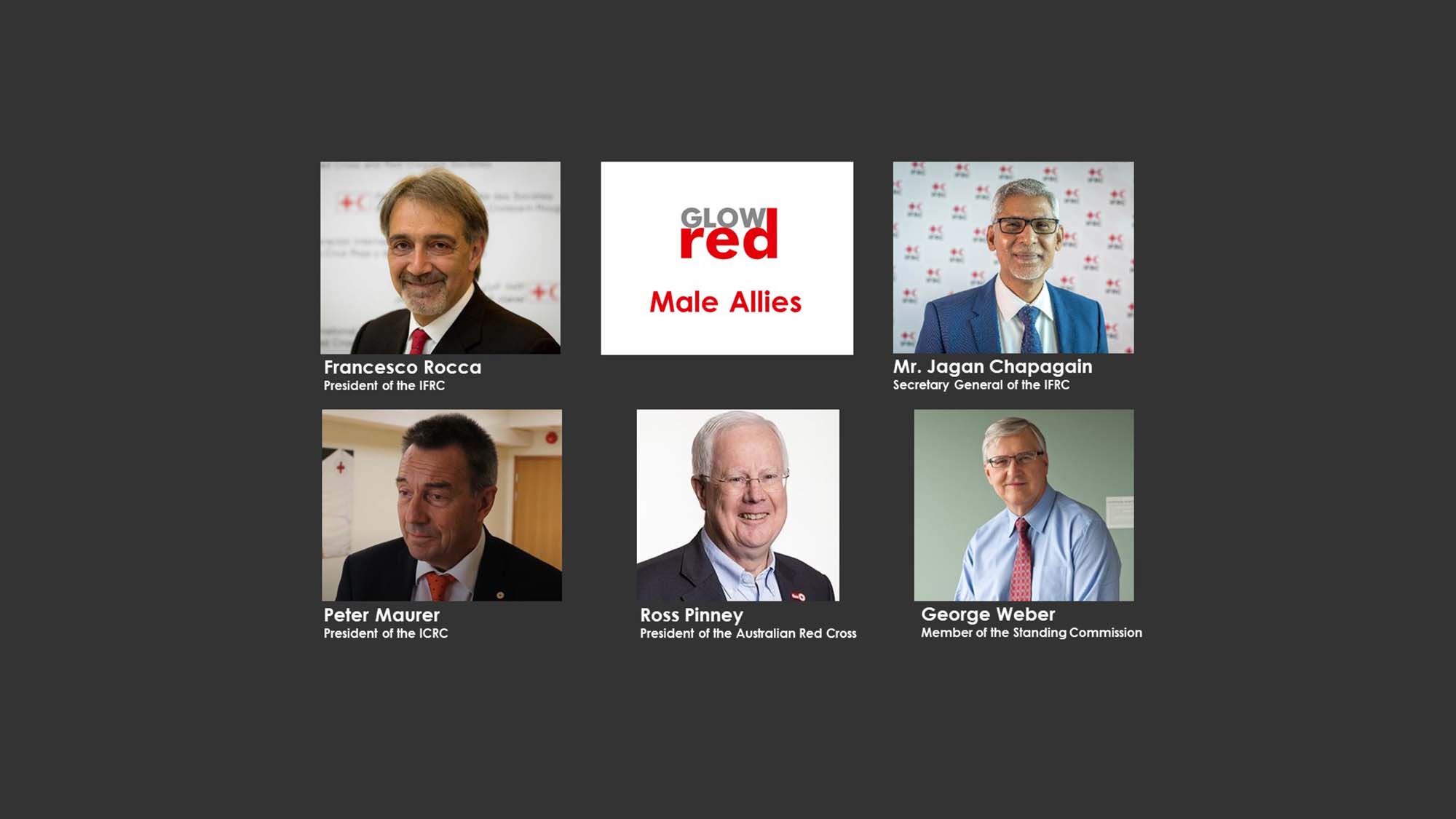 Voices of Support
The objectives of the GLOW Red Network, and the idea of increasing women’s leadership, is supported throughout the Red Cross Red Crescent Movement.
Share:

Mr. Jagan Chapagain, Secretary General of the IFRC and male allie, sent a message to GLOW Red during our Annual Network Meeting 2022. Find the recording here.

Hear male allie George Weber, member of the Standing Commission, former Secretary General of the Canadian Red Cross and the IFRC,  speak about how use of inclusive language and standards can be used in the work for diverse representation, recorded during the closing session of the GLOW Red Network meeting March 2022, here.

"Both men and women need to change their view of what women can achieve" This is a message that male allie Ross Pinney, President of the Australian Red Cross, want to get across. Se the recorded interview from the GLOW Red Annual Network Meeting in March 2022 here.

The importance of gender equality: Peter Maurer, President of the ICRC

GLOW Red is working closely with the IFRC governance and the working group in the IFRC Governing Board on Governance Excellence, Gender and Diversity chaired by the Canadian Red Cross Governing Board member who is also part of the Coordination Group of GLOW Red. This working group initiated a review of quota mechanisms and a decision was taken in the IFRC General Assembly in December 2019 which will guarantee a minimum of 27 % women in the IFRC governing board. This quota ensures that at least 2 of the seats per region, out of the 5 seats total, will belong to women.

The IFRC Secretariat has set a goal of gender parity at all staff levels by 2028. They also recently adapted a Gender and Diversity Policy (2019) that commits the IFRC and National Societies to no more than 2/3 of one gender in leadership teams and governing bodies.

Within the ICRC, a goal has been set to reach gender-parity among its managers by 2022. A review has been carried out and actions are being integrated into the planning for the coming years.

Red Cross and Red Crescent leaders from across Asia, the Pacific and the Middle East have committed, in 2018, to ensuring women make up at least 50 percent of elected and appointed leadership positions by 2022.

At the Inter-Americas Conference in 2019, the Buenos Aires Commitment included a section on the importance and advocating for the leadership role of women.

While many national societies have targets for achieving gender parity, many of this information is not shared throughout the movement. Does your national society have a specific goal in terms of gender parity? Would you like to share your successes with GLOW Red? Reach out to us, glowred@redcross.se

Avvartes has opened their Resilience for Growth leadership program to GLOW Red members since June 2020. The program allows female leaders to tap into the sources of resilience needed in these disruptive times to thrive in senior roles, build multinational networks and identify ways to bring value back to the organization. With the support from Avvartes, GLOW Red can increase and strengthen the pipeline of future women leaders.

GLOW Red is pleased to partner with The Humanitarian Coaching Network (HCN) to support the development and wellbeing of its members globally. The HCN is a global community of professional coaches committed to supporting humanitarian and development staff, particularly those serving in the vulnerable, isolated locations.

In order for GLOW Red to be able to continue with our advocacy work and offer trainings and mentorship programs for our members, we need your support. We are in search of partners who
believe in the necessity of women’s leadership. We are welcoming support in the form of: mentorship, strategic thinking, and long-term funding to assist with GLOW’s activities.